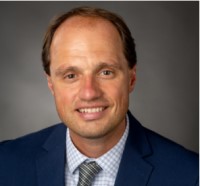 Jim Strode, Ph.D., is the Chair of the Department of Sports Administration and an Associate Professor at Ohio University. Previously, Strode was the Dean of Graduate Studies at Ohio Dominican University (ODU) in Columbus, Ohio.

As dean, Strode provided leadership over eight masters level programs, and assisted with the university’s efforts to receive Higher Learning Commission approval to offer doctoral level education. Strode was instrumental in leading the conversion of graduate programs from traditional to online and blended formats. Additionally, he led efforts to create professional development opportunities for students, enhanced synergies between academic affairs and the admissions process, and developed relationships with other universities to create admission pathways for graduate education.

In December 2018, Strode delivered the address at the 110th commencement exercise at ODU.

In his time at ODU, Strode achieved tenure and the rank of associate professor. In 2013, Strode developed the curriculum for a Master of Science in Sport Management, and served as the inaugural director. He served as the coordinator for the undergraduate program, was advisor of the Sport Management Society, and helped develop new minors in coaching and sport media.

As a faculty member, Strode was elected to the faculty senate leadership team, the rank, tenure, and promotion committee, and served as chair of the faculty policy and research committee.

Beyond the classroom, Strode has published in multiple peer-reviewed journals and has presented his research on athletic donor motivations and issues related to coaching effectiveness at the North American Society of Sport Management (NASSM), the America Alliance for Health, Physical Education, Recreation, and Dance (AAHPERD), and other national and international conferences.

Prior to his arrival at ODU, Strode was an assistant professor at Ashland University in Ashland, Ohio, where he served as the head of the undergraduate Sport Management department, advisor of the Sport Management Club, and taught graduate and doctoral level courses.

Strode received a bachelor’s degree in Business Administration from the University of Wisconsin (UW), and his masters and doctorate in Sport Management from The Ohio State University. While at UW, Strode served as an ex-officio member of the Wisconsin Alumni Association Board of Directors and the undergraduate representative to the UW Athletic Board. At OSU, Strode was the president of the Student Professional Development Association and received the William N. Wasson Student Leadership & Academic Award from the National Intramural-Recreational Sports Association (NIRSA).

Outside of the classroom, Strode is a 19-year veteran high school basketball coach, having served as head coach of the girls programs at Worthington Kilbourne, Bexley, and Centennial High School. He is the past president of the District 10 Basketball Coaches Association.