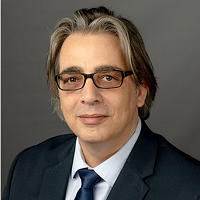 Professor Grigorios Livanis is an assistant professor of strategy and international business at Ohio University and has research interests in the areas of global strategy, innovation, and organization design. A native of Greece, he earned his Ph.D. and MSc degrees in Applied Economics, minoring in Mathematics and Finance, from the University of Florida.

Prior to Ohio University, Professor Livanis led courses on Business and Corporate Strategy, International Business, Operations Management, and Business Statistics in the undergraduate and graduate programs of the D’Amore-McKim School of Business at Northeastern University. He also taught courses in Financial Management and Economics for the online MBA of Northeastern University as well as courses on Game Theory and Dynamic Optimization at Babson College and the University of Florida.

Professor Livanis received the General Electric Best Teacher of the Year award in 2018 from the D’Amore-McKim School of Business and was a finalist for the same award in 2016. He was also the recipient of Northeastern University’s Excellence in Teaching Award in 2010 and has been nominated by his students for the same award in four consecutive years. He was also nominated for the United States Professor of the Year Award in 2010 and was voted as “Favorite Faculty” by the 2013 graduating senior class of Northeastern University.