Women in Electrical Engineering: Opportunities and Resources for Pursuing an Engineering Career 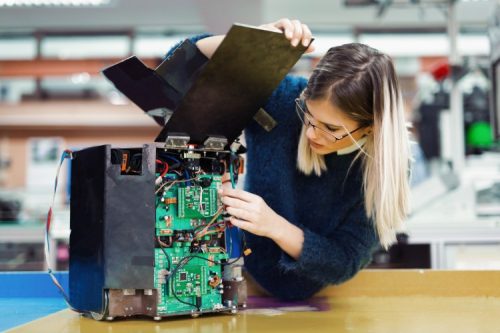 Women in electrical engineering make important contributions with their work but continue to be underrepresented in the field.

According to the National Center for Science and Engineering Statistics, women account for over half of the college-educated workforce, but only 16% of engineers and 27% of computer and mathematical scientists. As the Society of Women Engineers reports, over 32% of women switch out of degrees in STEM (science, technology, engineering, and mathematics), and female engineers earn 10% less than male engineers.

Many efforts are being made to combat these issues and increase gender diversity and representation in electrical engineering. Women interested in becoming engineers can pursue an advanced education, such as a Master of Science in Electrical Engineering, to develop the knowledge and skills to overcome these hurdles and build rewarding careers in their field.

The Impact of Women in Electrical Engineering

Women have been impacting electrical engineering for over 100 years. Trailblazers in this field include the following:

Edith Clarke was the first female electrical engineer. Clarke began her career working for AT&T in 1912 and went on to work for General Electric for 45 years. She is best known for inventing the Clarke Calculator, a device that can solve graphical equations used to transmit electrical energy.

During World War II, actress Hedy Lamarr helped invent a radio frequency-hopping technology that could not be jammed or intercepted. Her technology has been used on U.S. Navy ships and incorporated into Wi-Fi and Bluetooth devices.

Margaret Hamilton was instrumental in developing the onboard flight software for NASA’s Apollo program, which landed the first humans on the moon in 1969. Hamilton received the Presidential Medal of Freedom in 2016 for her groundbreaking work.

These pioneers in electrical engineering can act as inspirations for a new generation of leaders in the field, proving that women can make great strides in STEM fields despite obstacles, which include gender discrimination and limited access to entry. Their legacies can motivate women to serve as mentors to others as they build interest and experience in engineering. According to the EngineeringUK report, “Gender Disparity in Engineering,” 46% of girls aged 11 to 14 would consider a career in engineering, but only 25% of girls aged 16 to 18 say the same. Meanwhile, girls outperform boys in almost all STEM fields of study, including engineering.

According to Woman Engineer magazine, the top five corporate employers of women engineers in 2020 are:

Additionally, the top five government employers of women engineers in 2020 are:

A female electrical engineering project manager at Lockheed Martin Space, for example, leads a team of engineers that is designing electrical components for NASA spacecraft. Meanwhile, Google is a sponsor of TalentSprint’s Women Techmakers Engineering Fellows Program, which aims to provide low-income and underprivileged female students with career opportunities in engineering.

Each June, International Women in Engineering Day shines a spotlight on women’s accomplishments in the industry and inspires up-and-coming female engineers to join in. These proactive efforts are crucial in fixing the “leaky pipeline” of women prematurely leaving the engineering field due to unequal opportunities and representation.

Women in electrical engineering can develop certain skills and competencies for success in their careers, including:

Women in electrical engineering can use these resources to build their networks and discover opportunities to advance their careers:

For women pursuing careers in electrical engineering, an advanced degree can be invaluable. It can help them gain the in-depth knowledge and hands-on experience they need to start –– and grow –– their careers with confidence, despite the obstacles that might get in their way.

Ohio University’s online Master of Science in Electrical Engineering program is designed to help future engineering leaders build electrical systems and solve complex technical problems with real-world applications in their industry. Courses in the 100% online curriculum combine principles of advanced electrical engineering with training in responsible and sustainable design, so graduates can go on to create impactful and rewarding careers in a competitive and growing field.

Learn more about how Ohio University’s online Master of Science in Electrical Engineering can help you pursue your career goals.

How Electrical Engineering Has Shaped the Modern World

Automation.com, “Examining the Role of Women in Engineering’s History and Future”

The Guardian, “How Changing Attitudes Are Closing the Gender Gap in Engineering”

Interesting Engineering, “Tips for Fresh Graduates: What to Do After Getting an Electrical and Electronics Engineering Degree”

NPR, “‘Leaky Pipelines’: Plug the Holes or Change the System?”

World Economic Forum, “3 Things to Know About Women in STEM”

World Economic Forum, “How Can We STEM the Tide of Women Graduates Leaving Science?”