What Do Electrical Engineers Do? 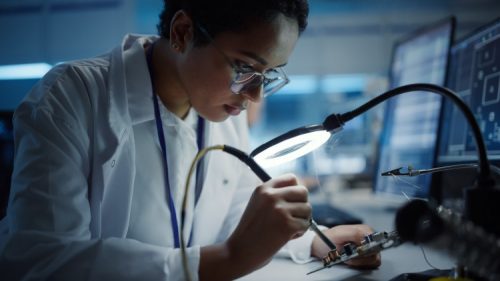 From the moment Thomas Edison invented the working light bulb in 1880, advancements in electrical engineering have laid the groundwork for many modern innovations. These innovations — such as mobile phones, GPS technology, and internet devices that connect the world with data and people — continue to shape our everyday lives.

Electrical engineers also have strong computer skills, as demonstrated by their use of software that helps them perform numerical computations, conduct power system simulations, and analyze diagrams. For example, electrical engineers use computer-aided design (CAD) to build and design models, and PSpice software to simulate and validate analog and mixed-signal circuit performance.

Other technology and software used by electrical engineers include:

What do electrical engineers do to influence societal functionality? Their work impacts society in different ways. For example, as climate change takes center stage as one of the biggest concerns of the 21st century, electrical engineers will help create solutions to reduce humanity’s dependence on fossil fuels — think of how electric cars today are reducing carbon emissions.

What Can I Do with a Degree in Electrical Engineering?

Examples of what you can do with a degree in electrical engineering are everywhere — in the sky as you fly on a plane, on the road as you drive your car, or right in front of you as you check your social media activity on your smartphone.

Below are some examples of positions that are open to graduates who hold a Master of Science in Electrical Engineering (MSEE) degree.

The types of aircraft aerospace engineers work with typically include:

The types of spacecraft aerospace engineers work with may include manned spacecraft such as:

Aerospace engineers have a deep understanding of aerodynamics, an area of physics focused on determining the forces at play when objects move through the air and propulsion. This knowledge enables engineers to determine the mechanisms needed to move an object forward or upward. They also have knowledge of materials and structures, propulsion, vehicle dynamics, control, and software development.

With the rising use of drones for various applications, aerospace engineers are also working in nontraditional, non-aeronautical sectors. For example, aerospace engineers can work in the construction and real estate sector to develop drone systems with mapping, surveying, and filming and photography capabilities.

Automotive engineering is a branch of engineering focusing on the design, manufacturing, and testing of mechanical systems and components in vehicles, including automobiles, trucks, motorcycles, buses, and earthmovers (vehicles used at construction sites). Traditionally, automotive engineers worked on designing and manufacturing cars with internal combustion engines. However, they are increasingly designing plug-in hybrids and battery-electric vehicles, which are becoming mainstream.

Automotive engineers create and improve designs and mechanisms related to automotive bodies and engines. They also work with developing electrical wiring and circuitry, software, and operational systems, sensors, and equipment for functions such as navigation and data backup. Automotive engineers work with CAD software to develop innovative designs. They also build prototypes that require the use of hand tools and equipment to shape parts and components.

With the proliferation of cars, automotive engineers are concerned with safety in their designs. Additionally, fuel economy and emissions are key considerations in automotive design to mitigate the impacts of climate change.

In addition, they possess strong communication and management skills to interact with other engineers, keep projects on track, and delegate tasks to colleagues working on different components of a design. They must address problems, as they conduct tests on designs and engine performance, and solve issues identified in earlier models.

It is typical for automotive engineers to work in office settings for car manufacturers and original equipment manufacturers of car parts. Sometimes, fieldwork is necessary to gain a perspective regarding the real-world performance of their designs.

Semiconductors conduct heat between a conductor and insulator in microprocessor chips and transistors to power electronic devices. These tiny devices have had a monumental impact on our society. So much so that a region in California — where many of the largest technology companies operate — is known as Silicon Valley, because semiconductors are at the heart of technology and electrical products, from smartphones and electrical appliances to medical devices and bank ATMs.

An embedded system is a physical device or product consisting of hardware and software designed to do a specific task. Examples of embedded systems people use daily include health trackers and smart home appliances such as refrigerators or microwave ovens. An embedded system can also be part of a more extensive system that functions as its host, which means that it only works when it is connected to that system. For example, anti-lock braking systems (ABS) in cars only work as part of an automobile system. Disconnected from the vehicle, the ABS is not functional.

The role of the embedded systems engineer is to make physical devices and products work with their software. These devices may range from smart home devices and physical health trackers to medical devices, airplane components, and far beyond. The embedded systems engineer designs the software to run only on a specific piece of hardware. General responsibilities include developing embedded software and systems from design to debugging stages. They also conduct code and design reviews, validate designs, and integrate systems and components.

It is typical for embedded systems engineers to work indoors, from formal office environments for writing code to workshop settings for creating prototypes or building hardware components.

What do electrical engineers do to have such a significant impact on our daily lives? They develop the sources of electricity — from large power plants to microchips — that power whole cities, the machines we use, and the devices that connect us to data and each other. As technology and electricity converge to expand the digitization of everything, electrical engineers will support continual advancements in technology across industry and society.

If you’re looking to help build the future, Ohio University’s online Master of Science in Electrical Engineering program teaches the core principles to help advance your career as an electrical engineer.

Electrical Engineering vs. Computer Science: Which Career is Best For You?

MRL Consulting, “What Does a Semiconductor Engineer Do?”

Trenton Systems, “What Are Embedded Systems?”