The Rise of Girls’ Wrestling in High School 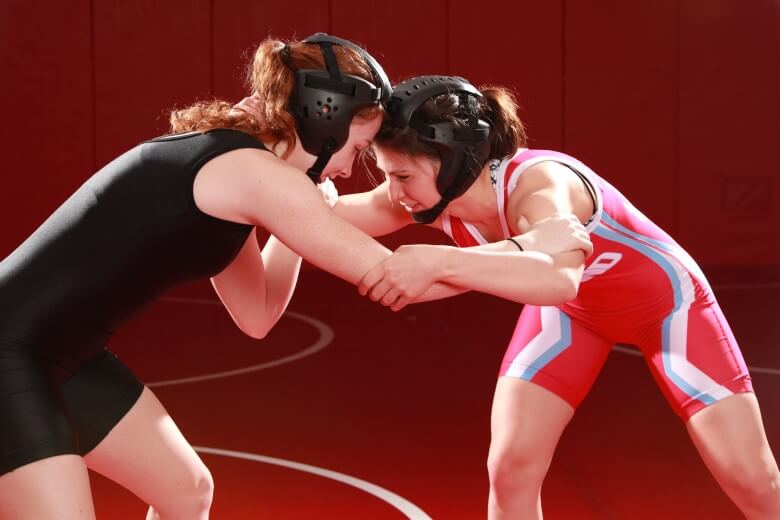 Once considered an activity exclusively for boys, wrestling has become one of the fastest-growing sports for girls at the high school level. Girls have been on teams with — and competed against — boys for years, but as interest in the sport increases, high schools across the nation are adding female-only teams and states are creating girls-only championships.

The growth has been impressive. In 1990, just 112 high school girls participated in wrestling, Gary Abbott, USA Wrestling’s director of communications, writes on the National Wrestling Hall of Fame blog. The numbers grew, sometimes by more than 10% annually, and by the 2016-2017 school year, 14,587 female high schoolers were active in the sport.

And the numbers keep soaring. In the 2018-2019 school year, more than 22,000 girls were representing their schools on wrestling teams, Joan Fulp and Andrea Yamamoto, co-chairs of the USA Wrestling Girls High School Development Committee, note in their presentation to the Oklahoma Secondary Schools Activities Association (OSSAA). They report that more than 15 states have officially sanctioned girls’ championships, and 61 colleges offer women’s wrestling programs.

Those girls in the ’90s were trailblazers, Abbott maintains.

“In the early years, girls only had the opportunity to participate on the boys wrestling team at their high school. This was not an easy task. It took a great deal of courage to wrestle, not only because of the physical disadvantage, but also because it was not yet accepted by society for girls to train and compete against boys in a combat sport like wrestling,” he writes.

If current trends continue, more athletic directors (ADs) can expect to see girls wrestling teams as part of their programs. Earning a master’s in athletic administration online can help ADs develop the skills and expertise they need to be effective leaders for this increasingly popular sport.

What to Know About Women’s Wrestling in High School

“Our view is that girls can do anything — especially wrestle. When we talk about wrestling, the benefits that participants get out of this sport are profound. Our impact is helping girls and young women learn where their self-confidence is, learn what resilience means, learn about healthy choices both physically and mentally, and learn how to dig deep within themselves so that they can become whoever, whatever they want to be both on and off the mat,” Wrestle Like a Girl says on its website.

Boys teams used to be the only option for girls who wanted to wrestle. And because wrestling is a weight-class sport — one that pits competitors of basically the same size against each other — the genders can often compete on a roughly equal footing.

“Females are fantastic competitors, and when they have plans to compete in college and possibly to try out for World and Olympic teams, they will certainly be successful within the arena of competing against the opposite gender,” Katherine Shai, a founder of the women’s wrestling platform LuchaFit, says in “What You Don’t Know About Being a Female Wrestler” on AthleteNetwork.com.

But as opportunities for advancement in the sport increase for females, so does the impetus for girls-only competition — and Shai is a big proponent.

“We actually want same-gender competition nationally,” her article continues, adding that obstacles such as lack of acceptance can discourage girls from pursuing the sport.

“The best way to grow the sport of girls wrestling is to include a division where girls can compete against their own gender. Just because a girl CAN be successful against the boys does not mean that the sport will grow to its potential by limiting competition.”

Going to the Mat for a Girls Wrestling Program

So what does a high school sports manager do when he or she wants to institute or expand a women’s wrestling program in high school? ADs have to be able to provide support, assistance, and training for coaches who work directly with female student-athletes.

Coaching girls in a contact sport is different from working with boys — and not just for the obvious reasons. According to coaches interviewed for “What to Do: Male Coaches, Female Wrestlers” on TeamUSA.com, sports professionals working with girls should be aware that:

Girls want the same challenges as boys, Fulp and Yamamoto note in their presentation, as well as the same opportunities to learn and compete.
“Girls need your leadership and life experiences to improve their lives,” they advise, adding that coaches and ADs should think long term and mentor girls to become future wrestling coaches and officials.

Above all, ADs should inspire their young female wrestlers. Ways to do so include hanging posters and information for girls in the wrestling room, showing inspiring videos of girls or women’s matches, or taking the team to watch female wrestlers compete.

“Females should see the future opportunities in the sport,” the flier says, “and also know they are not alone in their efforts.”

The program works in collaboration with the National Intercollegiate Athletic Administrators Association (NIAAA) to prepare graduates for certification and is accredited by the Commission on Sport Management Accreditation (COSMA). For more information, contact Ohio University now.

Building a Future in Sports Coaching for Women

What You Don’t Know About Being A Female Wrestler: Athlete Network

What To Do: Male Coaches, Female Wrestlers: TeamUSA.com