Meditation for Anxiety and Addiction: The Ultimate Guide 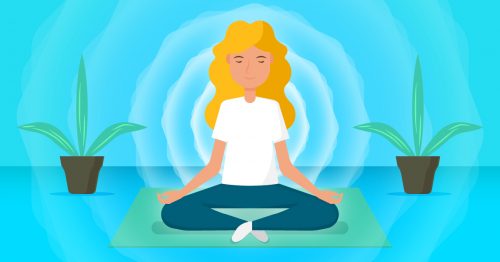 Meditation has been demonstrated to be effective in helping people manage both anxiety and addiction. Studies of mindfulness-based interventions (MBIs) have shown a reduction in substance misuse among people with addictive behaviors, such as excessive drinking and opioid use. MBIs may achieve this outcome by “modulating cognitive, affective, and psychophysiological processes integral to self-regulation and reward processing,” as reported in the study that investigated MBI treatments for addiction, published in the journal Addiction Science & Clinical Practice.

Anxiety and Addiction: Signs and Statistics

Anxiety disorders impact 275 million people worldwide, or about 4% of the global population, according to the World Health Organization (WHO). In the U.S., about 18% of the population aged 18 or older, or about 40 million people, suffer from an anxiety disorder. This is according to the Anxiety and Depression Association of America (ADAA) in its article, “Facts & Statistics.”

Treatment for anxiety and addiction depends on a person’s unique circumstances. A treatment plan can include medicine and therapies, such as cognitive-based therapy (CBT). Meditation can also be added to a treatment plan.

From an evolutionary perspective, emotions such as fear have benefited humans and enabled them to survive. For example, the fear that arises from seeing a bear on a hiking trail can cause people to take quick action to protect themselves.

Thanks to fear and its close cousin, anxiety, our senses and cognitive functions are triggered to activate the fight-or-flight response in dangerous situations. Less-hazardous reasons that people may feel anxious include having to make an important presentation or take a final exam. This type of anxiety, which helps us stay alert and aware, differs from having a clinical anxiety disorder.

People suffering from anxiety disorders experience sudden, intense, and persistent feelings of worry about everyday circumstances, interfering with their ability to perform daily tasks. For those who have this debilitating disorder, anxiety episodes recur regularly, can feel uncontrollable, and sometimes evolve into panic attacks within minutes.

For individuals who are diagnosed with an anxiety disorder, the physical expression of emotions such as anxiety, worry, and fear can get out of proportion with reality. Someone with anxiety may also take extreme, unhealthy measures to reduce their symptoms. For example, an individual with a type of anxiety known as social anxiety disorder may frame their life to avoid any situations where they may have to interact with people.

Resources about meditation as a treatment for anxiety disorders include the following:

Symptoms of anxiety often start during childhood or adolescence and continue throughout adulthood. Common symptoms of an anxiety disorder include a relentless sense of impending danger or doom, panic attacks, increased heart rate, trembling, hyperventilating, and gastrointestinal problems. People with an anxiety disorder also may have difficulty with their concentration, their memory, or may easily become irritable. However, symptoms may vary depending on the disease.

This type of anxiety is characterized by excessive fear. Individuals with GAD may respond and behave negatively, emotionally, and physically to a threat that is imagined, real, or may happen in the future.

Individuals with OCD worry about cleanliness or experience intrusive thoughts related to cleanliness or germs. An environment considered unclean for a person with OCD can trigger a panic attack. To reduce their anxiety, they perform compulsive behaviors such as excessive hand-washing.

Trauma disorders include post-traumatic stress disorder (PTSD). This mental disorder can be experienced by members of the military returning from a tour of duty in a war. Trauma can also be caused by unexpected events, such as the death of a loved one, a car accident, or a violent act.

People with this disorder experience high levels of anxiety in social situations. Their fear may include becoming embarrassed or being judged by others. A person with a social anxiety disorder may feel overly self-conscious about their appearance. To minimize their anxiety, they often take drastic steps to avoid social interactions.

More information about anxiety, anxiety types, and treatments can be found in the following resources:

Anxiety disorders can affect people who have genetic dispositions to the disorder or underlying medical conditions. Medical problems linked to anxiety can include heart disease and diabetes. In the article “Is Anxiety Genetic?”  Healthline, the physical and mental health website, reports the RBFOX1 gene could make a person more likely to develop an anxiety disorder.

The environment can be a factor, as well. For example, a person’s surroundings, such as living in a violent home or experiencing trauma at a specific location, can become a cause of an anxiety disorder. Anxiety often occurs with other mental health disorders, such as substance abuse and depression.

Meditation helps people with anxiety and addiction disorders increase their awareness of the present moment and accept their current living circumstances. Research shows meditation may produce significant benefits for individuals who are impacted by anxiety disorders. In the article “Meditation: A Simple, Fast Way to Reduce Stress,” the Mayo Clinic describes several effective forms of meditation.

People with anxiety battle thoughts in their mind that deal with the past or future. At times, these thoughts are racing and negative in nature, prohibiting people from concentrating and feeling at ease. Mindfulness meditation, a mental training practice, helps patients slow down their thoughts, calm their minds and bodies, and focus on the present. The following resources provide guidance and additional information about mindfulness meditation.

Yoga involves a series of poses that typically require physical flexibility. Breathing is part of yoga as well. Through mindful breathing, balance, and focus on the present moment, yoga can help calm the busy minds of people with anxiety disorders. A 2018 study published by the National Center for Complementary and Integrative Health found yoga might help reduce the intensity of anxiety. The following resources provide guidance and additional information about yoga for anxiety. 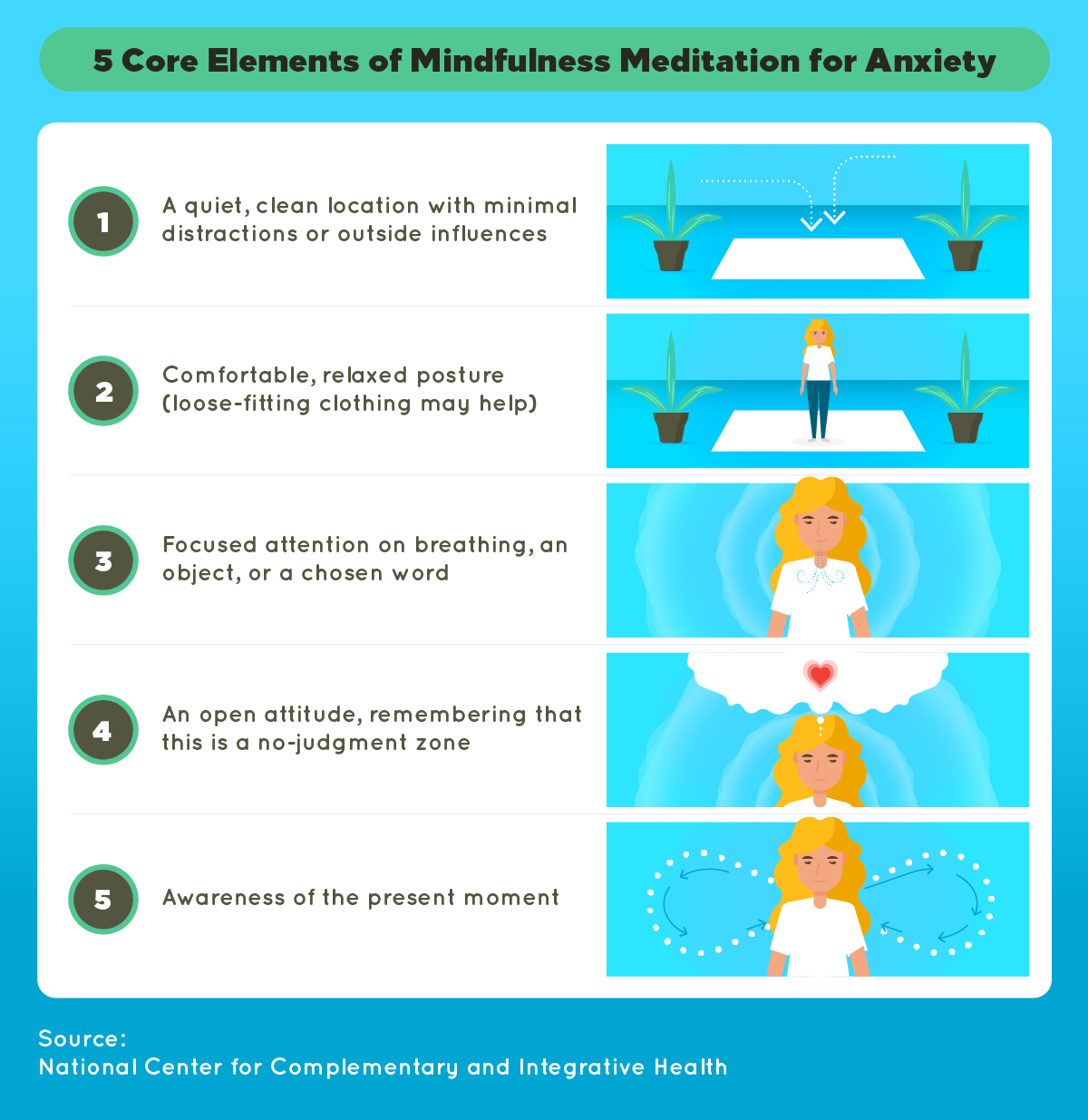 About 60% of Americans will try at least one drug in their life, while 32% will remain users of a drug for the rest of their life, according to the National Rehabs Directory article, “5 Ways You Are Physiologically Predisposed for Addiction.”  Factors that may determine a person’s disposition to addiction include the following:

Chemical addictions include alcohol use disorder. In the article “Alcohol Facts and Statistics,” the National Institute of Alcohol Abuse and Alcoholism reports this chronic relapsing brain disease affects more than 14 million people aged 18 and older in the U.S. People can also become addicted to opioid medications. According to the U.S. Centers for Disease Control and Prevention (CDC), the opioid epidemic claimed about 450,000 lives in the U.S. from 1999–2018. Drugs such as cocaine, heroin, and hallucinogens also are addictive.

Research shows links between addiction and anxiety disorder. The disorders can occur together with other mental health disorders, such as depression.

More information about addiction, addiction types, and treatments can be found in the following resources:

In a study about the cognitive function of patients with substance use disorder published by the journal Drug and Alcohol Review, people addicted to substances such as drugs and alcohol are more likely to have cognitive impairments. The study found that screening patients in the early stages of treatment is critical for optimizing treatment outcomes.

Addiction can cause impaired control of body functions, and people with the disorder can become violent. They often experience social problems and are predisposed to risky behavior. An addiction to a substance can rewire the brain, which can lead to the development of other mental health disorders, such as anxiety. Addiction not only impacts addicts. Family members and friends often find themselves struggling with a loved one who is suffering from substance abuse disorder.

Symptoms of addiction can look the same as other disorders. For example, withdrawal from substance abuse often looks like symptoms of anxiety, potentially making it difficult for health care professionals to develop a treatment plan.

Research shows that meditation may produce significant benefits for users of addictive substances. A study published in Substance Abuse and Rehabilitation cites evidence that mindfulness training can help prevent relapse in people with substance abuse disorders. It does this by targeting the “neurocognitive mechanisms to produce significant therapeutic effects.”

Meditation practices for those suffering from addiction include the following.

Techniques such as deep breathing exercises and focusing on the present moment can help counter negative behavioral urges in people recovering from a substance abuse disorder. The following resources provide guidance and additional information about mindfulness meditation.

This method of meditation is a form of Chinese martial art where people perform gentle, slow-paced postures and movements while doing breathing exercises. A recent study shows that mind-body practices such as tai chi, as part of an integrated intervention program for alcoholism (IIPA), can significantly improve self-regulation for people struggling with alcohol abuse. 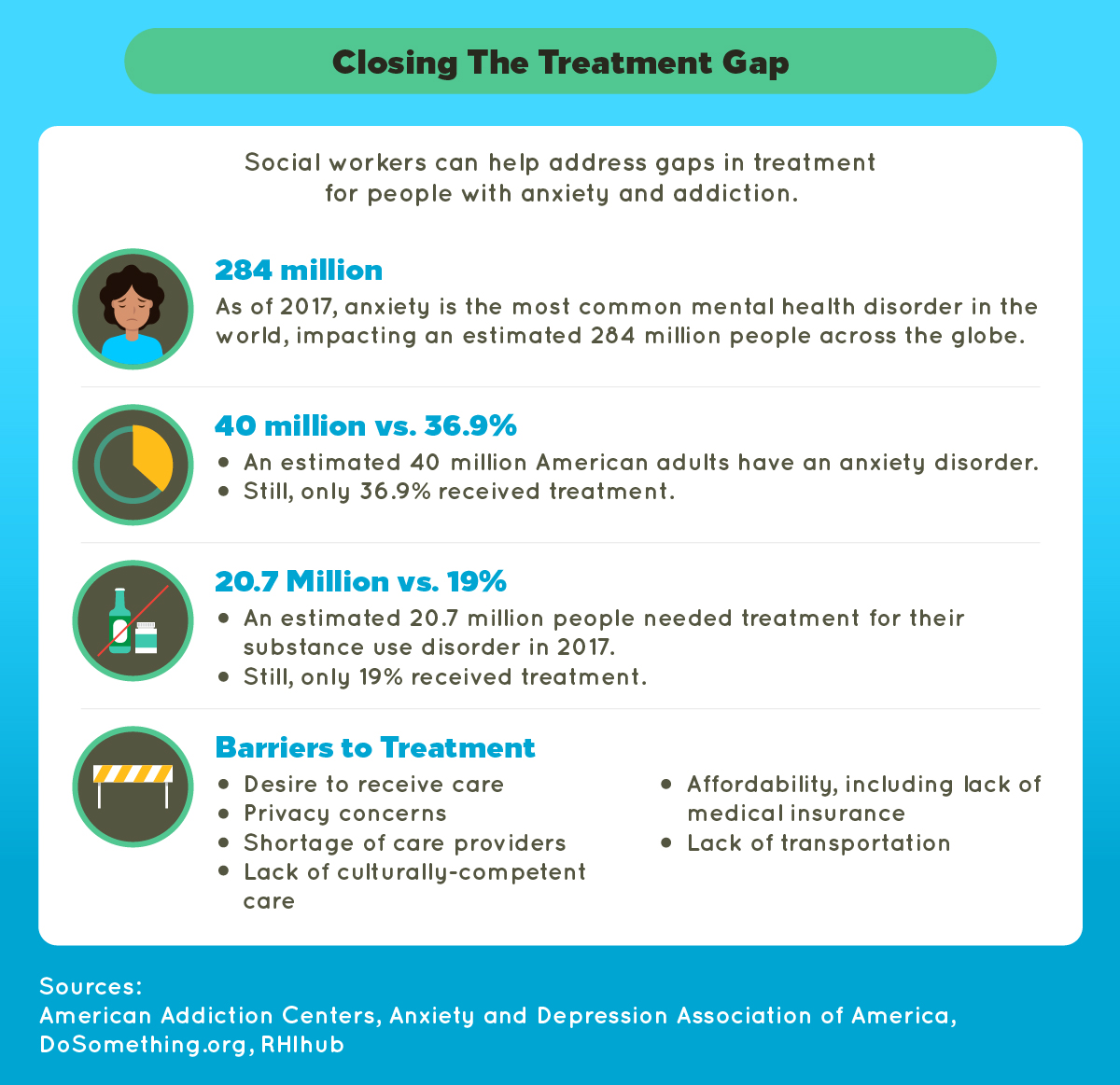 Professionals, such as social workers, who often treat patients with anxiety or addiction increasingly promote meditation as part of a treatment plan. Meditation is an integrative component of treatment plans that can be performed anywhere by anyone.

With freely available resources, such as the ones presented in this guide, social workers can add meditation to their treatment toolbox to help address the mental health needs of underserved populations. Social workers can also incorporate meditation techniques into their ongoing practices, providing training and referring patients to various resources for help.

If you or a family member is facing mental or substance use disorders, SAMHSA’s National Helpline operates 24 hours a day/7 days a week, and the service is free and confidential.

Addiction Science & Clinical Practice, Mindfulness-based treatment of addiction: current state of the field and envisioning the next wave of research

The Lancet, New WHO Prevalence Estimates of Mental Disorders in Conflict Settings: A Systematic Review and Meta-analysis

X
X
Get Program Details
This will only take a moment