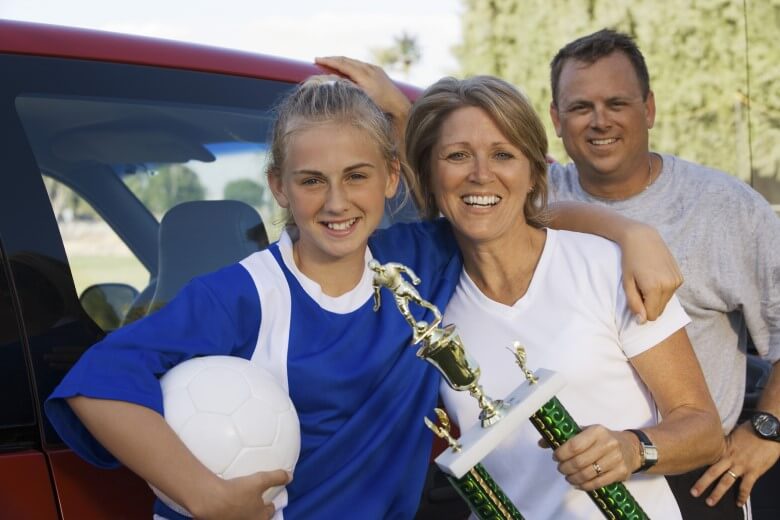 High school sports administrators set the tone for the fans in all sports programs. Their efforts to encourage positive parental support begins before preseason and extends past the last game.

A parent’s desire to cheer on a child sometimes leads to behavior that exceeds the bounds of civility. Athletic directors need to communicate early and often with parents about expectations and guidelines.

Sports managers guide parents to become a positive part of a sports team, according to Larry Lauer of the Institute for Youth Sports at Michigan State University.

“Issues with parents are a growing concern,” he says, adding that 66% of parents are positive influences. Making these parents a part of the team is important. He also understands that problems with parents who are a negative influence can keep a sports manager up at night. Helping parents find the right balance can be challenging.

Experienced athletic professionals teach parents about the role they play in helping a team reach its goals, Lauer continues. Most great athletes have at least one supportive parent, but all parents have a responsibility to be involved.

Children often adopt a parent’s sport goals, Lauer notes, even if a parent doesn’t spell these out. The parent’s perspective is often the lens through which the child interprets success and failure, which influences emotions, stress, and satisfaction.

How can athletic departments convey to parents that a sports game is not an arena for the parent’s ambitions to be played out? That instead, each match is a game for students who are not yet adults and whose ambitions differ from their parents?

Parents should look at sports as something that is less about them and more about the child, according to the Institute for the Study of Youth Sports. The high school athletic administrator can communicate these tips to parents before the season starts:

Including the Parents in the Team Culture

High school basketball coach Nate Sanderson writes on BreakthroughBasketball.com that he experienced a change of attitude when instead of anticipating how he would “deal with parents,” he decided to invite the parents into the team’s culture.
He describes the shift:

“We decided to do something completely different during our parent meeting. We still took a few minutes to address important issues such as ‘Who starts and who plays,’ but we spent the vast majority of our time doing something far more important. We invited the parents to participate in our culture.

“Our basketball program culture is built on three basic principles:
“Play Hard — Love Each Other — Do What We Do
“This defines everything we want to be about as a team. It is our identity. Over the years, we have become increasingly deliberate in teaching our players specific behaviors that demonstrate these values. This year, we decided to do the same for the parents by giving them specific things they can do to participate in our culture.”

Sanderson created an exercise for his parent meeting: he asked parents to answer questions about their expectations by writing down responses on index cards. This gave him a way to spot unrealistic expectations before the season began.

“The vast majority of the conflict we experience with players and parents is the result of unrealistic expectations,” he says. “This was a way to identify those so that we could disarm them before the season even started.”

In March, a Nevada high school coach asked the state athletic association to create consequences after a parent struck him. The Reno Gazette Journal reported in fall 2018 that Ed Partee, the girls’ soccer coach at Lowry High School in Winnemucca, NV, was punched in the face.

The hit happened when the father of a player on the opposing team at the Incline High School “charged onto the field and confronted him after his daughter took a hard hit during the game.”

Partee said his players told him the father was abusive toward the Lowry goalkeeper and other players. Partee told him he could not talk to the players in that manner. The man then punched Partee in the jaw, breaking it. The police and an ambulance were called to the game.

As a result, the Nevada Interscholastic Activities Association’s Sportsmanship committee made recommendations to the NIAA in June that outline penalties for negative interference in a game.

How Parents’ Behavior Has Changed

A 2016 survey titled Problems with Parents, run by AL.com, Birmingham, found that of 300 coaches, 63% say they have considered quitting because of parents’ behavior.

The tone set by the high school sports director can prevent many problems before they begin.

Established in 1966, the Master of Athletic Administration offered online by Ohio University is an opportunity for a sports professionals to add perspective on family involvement and psychological depth to their administrative careers. It was also the first online graduate degree focused on interscholastic sports. Because the program is online, students can pursue their degree without disrupting their professional or personal responsibilities.

The Importance of Professional Development for Athletic Directors

Athletic Directors: Planning for the Season

Making Parents a Part of Your Team: ASEP Webinar by Larry Lauer, PhD

Top 10 Parenting Do’s:  The Institute for the Study of Youth Sports

How I Stopped “Dealing” with Parents: Breakthrough Basketball

Problems with Parents: See the Results of the Survey for High School Coaches: AL.Com Birmingham