How to Become an Electrical Engineer 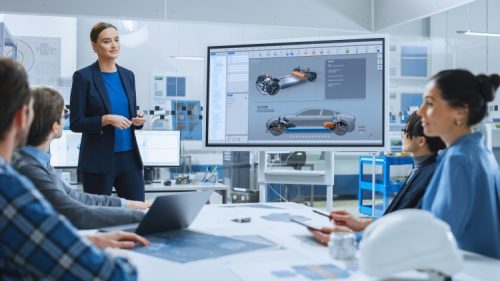 Whether it’s something as simple as a light bulb or a sophisticated piece of equipment like a smartphone, products that run on electricity are part of our everyday lives. The outsize role that electronic devices play in today’s society firmly positions electrical engineers as some of the most influential professionals of the digital age. Without them, we’d have no telecommunications, GPS navigation systems, or power generation equipment.

However, not all electrical engineering jobs are created equal, nor are all educational paths to the profession the same. To provide a comprehensive understanding of electrical engineering and what to expect when entering the field, it’s best to begin with a broad overview of what the job entails along with its core responsibilities.

The electrical engineering job description typically includes most of the following core duties:

The path to becoming an electrical engineer begins with education. Although a Bachelor of Science in Electrical Engineering (BSEE) provides a baseline knowledge of the engineering field and will qualify graduates for entry-level job opportunities, many students choose to take the extra step and pursue an advanced degree.

An MSEE program can provide students with more in-depth knowledge of subjects such as mathematics and physics, as well as technical, problem-solving, and critical thinking skills — all of which are essential in any electrical engineering role. When considering how to become an electrical engineer, education and on-the-job experience are two areas that are critical to the role.

Additionally, master’s in electrical engineering programs allow students to select a concentration. This is especially beneficial for those who already have an idea of the career they want to pursue after graduation. Concentrations in the MSEE program may include the following:

Generally, entry-level positions have no certification requirements for electrical engineering. Those looking for more advanced roles or leadership positions, however, should pursue a Professional Engineer (PE) license.

Licensed PEs oversee the work of other engineers, are authorized to sign off on projects, and can provide services directly to the public. Essentially, a PE license gives the electrical engineer more autonomy and authority. The requirements to qualify for this credential include the following:

Passing the PE exam shows that the engineer is competent to oversee projects and manage other engineers.

What Are the Different Areas of Electrical Engineering?

Computer engineers design and create software and hardware applications. An electrical engineer working in the field of computer engineering will create and test equipment such as circuit boards, routers, and computer programs. Other duties and responsibilities may include the following:

Autonomous unmanned vehicles (AUVs) are an emerging area of engineering in which electrical engineers design and build air, land, and sea vehicles that don’t require a human to pilot them. The obvious benefit of autonomy is that the craft functions while keeping humans out of potentially dangerous situations. Many AUVs currently being developed are for military applications, such as airborne drones, small tanks, and submarines.

The role of the electrical engineer comes into play in the design and functionality of the AUV. The AUV may be designed either to be controlled remotely by a human or to operate autonomously using artificial intelligence (AI). Autonomous vehicles can be designed to self-regulate using a series of sensors and cameras that direct the movements.

Perhaps one of the most popular examples of an AUV that’s currently being developed is the self-driving car from Tesla. However, the concept is still years away from being a flawless feature that requires no human intervention.

While a personal computer isn’t an embedded system, a cellphone, tablet device, camera, external hard drive, and any other device that connects to the computer is. Some embedded systems use basic embedded system software, such as Ada or C++, while others run on a specialized operating system, such as Windows or Linux.

DSP works like this: An analog-to-digital converter takes a real-world signal, such as a voice or song, and converts it into a digital format of ones and zeroes. These ones and zeroes are then processed and reproduced on the other end of the feed, recreating the sound of the original source. The brilliance of this area of electrical engineering is how quickly DSP occurs — virtually instantaneously. That’s the result of decades of optimizing and improvement by electrical engineers.

What Can I Do with a Degree in Electrical Engineering?

Aerospace engineers design and develop aircraft for military and commercial applications, along with various types of aerospace equipment. They serve as the resident experts on aviation projects and help develop policies and coordinate procurement programs for aircraft systems and subsystems. Other typical duties of an aerospace engineer include the following:

To be successful, aerospace engineers need to have analytical, critical thinking, and problem-solving skills. Additionally, they should possess well-developed business acumen and be proficient in mathematics and writing to clearly communicate their designs.

According to the U.S. Bureau of Labor Statistics (BLS), aerospace engineers made a median annual salary of $118,610 in 2020. The role is expected to grow by 8% between 2020 and 2030, on pace with the projected average job growth rate for all professions.

Automotive engineers enable car manufacturers to continuously put out new vehicle models year after year. They apply their background in electronic engineering and automotive expertise to create vehicles that yield more torque and horsepower, have better fuel economy, and produce fewer emissions. They’re also the masterminds behind a vehicle’s safety and convenience features, such as lane assist, remote start, and rain-sensing windshield wipers.

Of course, there’s perhaps a no better breakthrough in the field of automobiles than the electric car, which is steadily gaining in popularity worldwide. Electronic engineers are hard at work optimizing designs of electric cars to give them longer battery life and faster charging times.

Other typical duties of an automotive engineer include the following:

To be successful, an automotive engineer should have extensive knowledge of automobiles and the auto industry. Commercial awareness and staying up to date on industry trends are critical to the role. Additionally, automobile engineers should possess strong data analysis, problem-solving, and technical skills.

According to PayScale, automotive engineers earned a median annual salary of around $79,100 as of October 2021.

According to PayScale, embedded systems engineers earned a median annual salary of about $79,700 as of October 2021.

A semiconductor is a crystal material used in electronic circuits that conducts a partial current (hence its name). Semiconductor engineers work exclusively with semiconductors, which are used to conduct heat between an insulator and a conductor. Some common products that contain semiconductors are smartphones, televisions, medical equipment, and automobiles.

Typical duties of a semiconductor engineer include the following:

To be successful, semiconductor engineers should have an extensive background in manufacturing process engineering and engineering design as they relate to semiconductors. They should also be highly analytical, with the ability to troubleshoot any potential problems.

According to PayScale, semiconductor engineers earned a median annual salary of around $83,000 as of July 2021.

Since building a ship or other seagoing vessel is a massive undertaking, naval engineers need to be highly skilled in managing projects and delegating tasks to technicians. Other duties of a naval engineer include the following:

To be successful, naval engineers should possess a deep background in the construction and manufacturing process of naval ships and other seagoing vessels. They should be excellent communicators who know how to oversee large projects and efficiently delegate tasks.

Ohio University’s online Master of Science in Electrical Engineering program provides aspiring electrical engineers with the knowledge and skills to make an immediate impact in the field. Foundational courses such as those on engineering writing and computational tools for engineers help lay the groundwork for a successful career.

Choose OHIO as the place to start pursuing your professional engineering goals today.

Digital Circuits Overview for Electrical Engineers: What You Need to Know

CNN, “Tesla Owners Say They Are Wowed — and Alarmed — by ‘Full Self-Driving’”

Indeed, What Is Automotive Engineering? Career Description, Salary and Requirements