How to Become a Flight Controls Engineer 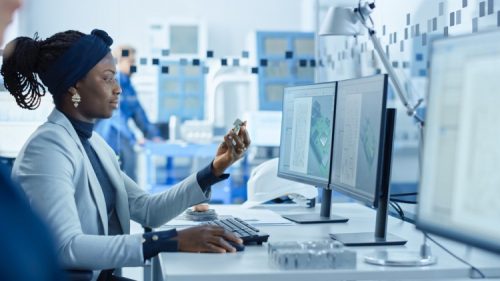 Control engineering is the driving force behind some of the world’s most innovative equipment and processes, including those used to guide aircraft.

This type of engineering optimizes how automated processes and machines work by using control theory. That concept establishes the conditions needed for systems to produce consistent outcomes, even when they’re processing different types of input like altitude or direction. It’s an important component of work in the aerospace industry, which focuses on aircraft and spacecraft.

In the aerospace field, engineers incorporate knowledge of moving parts, aerodynamics, and combustion to design, test, and manage the manufacture of aircraft and other machinery. They also test the efficiency of prototypes. In fact, it’s through this research and development that the aerospace industry is working to make changes to aircraft that could lead to less noise pollution and greater fuel efficiency.

Anyone interested in an aerospace career that incorporates control engineering might consider exploring the role of a flight controls engineer. An education that includes training from those with firsthand experience working in control engineering for aerospace, like that of an online Master of Science in Electrical Engineering program, can set the stage for advancement as a flight controls engineer.

What Does a Flight Controls Engineer Do?

Flight controls engineers enlist control theory to adapt to various system inputs that occur during flight, ensuring a consistent outcome regardless of changing conditions. Aircraft use sensors to measure outputs and provide feedback that triggers process adjustments to produce the desired result.

This process can facilitate automation, or a system that doesn’t require human input. Autopilot systems in aircraft can independently control factors such as altitude and movement, for example, or they can follow programmed navigation. Autopilot sends messages to the aircraft’s computer and systems when it senses movement and then mimics the appropriate reaction of a pilot. When autopilot senses that a plane’s wing is dipping, for example, it responds by directing parts on the body of the plane to resist the turn until it receives the message that the wings are level again.

They often partner with other types of engineers and the Federal Aviation Administration (FAA) to implement plans and changes. For example, they might work with design engineers to make updates that enhance performance and meet federal standards. Typical flight controls engineer job tasks include:

Students who plan to pursue a career in flight controls engineering should take courses that prepare them for the profession. That means they should focus on topics such as:

Flight controls engineers often hold at least a bachelor’s degree in aerospace, mechanical, or electrical engineering. Their studies should include engineering principles and topics like aerodynamics, propulsion, and stability and control. Professionals who also earn a master’s degree can qualify for additional opportunities in research and development, leadership roles, and university teaching positions.

While they’re not always a requirement, licensing and certification for some roles are available through the FAA. Additionally, flight controls engineers seeking higher-level jobs can pursue a professional engineering (PE) license through the National Society of Professional Engineers (NSPE) by:

PEs must engage in professional development to maintain their licensing.

Skills Needed to Be a Flight Controls Engineer

Flight controls engineers often are experts in areas such as software programming, data analysis, and aircraft construction. The job requires strong abilities in the following areas:

While salaries can vary according to factors such as education, experience, and location, the U.S. Bureau of Labor Statistics (BLS) indicates the May 2020 median annual salary of those in all aerospace engineering roles was $118,610.

For aerospace engineer roles overall, the BLS expects an additional 66,400 jobs in the field from 2019 to 2029, for a 3% increase in jobs. The BLS credits the positive job outlook to a growing demand for research and development that advances environmentally sound engineering, as well as interest in unmanned aircraft.

Opportunities in this field will be strongest for those with training in software such as C++ or a background in stress and structural engineering.

Gain Technical Expertise from Those with Firsthand Experience

If you’re ready to enlist the concepts of control theory as a flight controls engineer, explore Ohio University’s online Master of Science in Electrical Engineering program. Through the program, you’ll gain expertise from industry experts — including Dr. Jim Zhu, a professor whose control theory-focused research has been a force behind advanced flight control systems projects by NASA, the U.S. Air Force Office of Scientific Research, and the National Science Foundation.

Through Ohio University’s online Master of Science in Electrical Engineering, you’ll learn from leaders in the field while enjoying the convenience and flexibility of online education. Discover how the program can help you advance your career.

Women in Electrical Engineering: Opportunities and Resources for Pursuing an Engineering Career

Government of Canada, Careers in Aviation

Indeed, What Does a Controls Engineer Do?

National Society of Professional Engineers, What Is a PE?