Digital Circuits Overview for Electrical Engineers: What You Need to Know 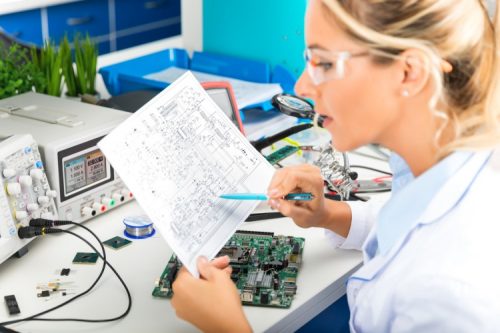 Human perception is based on how we interpret analog information. For example, the brain processes sound and light waves into the sounds we hear and the sights we see. That analog information can be digitized — transformed into bits that computers and devices can process — for storage and transmission, then turned back into a signal that we can see, hear, and understand.

Powering this constant transformation are two types of electric circuits.

Both analog and digital data moves via signals (i.e., electromagnetic or electrical currents that carry data from one device or component to another). However, the two types of circuits deliver data differently.

Digital circuits are fundamental to making devices that power our daily lives. They provide the building blocks of technology and electronics that enable us to listen to our favorite music, keep in touch with loved ones, and more.

Individuals who are pursuing an advanced career in electrical engineering should understand the language, technology, components, and characteristics of both analog and digital circuits. This knowledge is essential for developing innovative electronics and technology systems in a cost-efficient manner.

A graduate degree in electrical engineering, such as an online Master of Science in Electronic Engineering, can prepare individuals with advanced knowledge of digital circuit design and the essential technical skills to help drive global change.

A comparison of analog vs. digital circuits reveals variances in their design and differences in how they transmit data.

Analog signals provide a continuous output of information with a wide range of possible values. They exist in various natural physical forms: light waves and sound waves, for example. Analog signals can be detected and analyzed using instruments such as oscilloscopes, voltmeters, and recording devices.

Before the advent of computer and digital technology, devices such as radios, televisions, and telephones used analog signals to transmit information such as music, images, and voice. Typical applications included record players, landline telephones, photocopiers, and video recorders, to name a few. Many of these technologies have undergone digital transformations — think digital music streaming services, smartphones, and satellite radio.

Analog circuits remain in use today in various applications including temperature sensors, FM radio signals, and audio and visual equipment.

Characteristics of analog circuits include the following.

While analog circuits can directly transmit signals, a digital circuit must first alter the analog signal to interpret it. Then, it changes the information back to an analog signal that humans can understand.

Digital circuit designs consist of transistors and logic gates that execute a Boolean logic operation, determining that values are true or false. The binary system quantifies values as either 1 or 0, which can also mean that a value is “on” or “off.” Digital electronic devices and computer processors use a binary methodology to analyze and interpret information. They also use it to perform desired functions and output data in analog form so humans can understand it.

Digital circuit characteristics include the following.

Electrical engineers may also work on developing household appliances, lighting and telecommunication systems, and satellite communications. In each of these areas, electrical engineers need a thorough understanding of the differences between analog circuits and digital circuits to build the most efficient and integrated device or system possible.

What Are Digital Integrated Circuits?

Integrated digital circuits are another type of digital circuit. They are foundational components in electronics and technology equipment such as radios, smartphones, televisions, game consoles, navigation systems, and satellite systems.

An integrated circuit in general is an electronic device that assembles various electronic components on a small semiconductor chip. Devices, such as transistors and their interconnected elements, are integrated on semiconductor material, typically silicon, at small scale. Silicon is a readily available material found in sand. The components are generally microscopic in size.

Integrated circuits are typically designed with specific functionalities. For example, an integrated circuit can be designed for the sole purpose of amplifying a signal’s voltage. This can streamline the design process, saving electrical engineers valuable time in developing components for a new technology product.

Integrated circuits can be either analog or digital. Integrated analog circuits typically handle continuous signals, such as sound, and are commonly used for audio and visual applications. For example, when a band plays music on stage, they produce analog signals known as sound waves. In a venue such as a stadium, people furthest away from the band might not hear the music without amplification. Enter the microphone, a device with an analog circuit that detects, modifies, and amplifies the sound signal and feeds it to a loudspeaker. The analog circuit reproduces the sounds initially detected by the microphone.

The 1s and 0s of the binary system represent two states, represented in values as either on-off or open-closed. Similarly, Boolean algebra represents two values: true and false. Boolean algebra is a foundational aspect of integrated digital circuit design.

Digital integrated circuits use Boolean logic and operate through logic gates, which are physical arrangements of interconnected transistors in a digital chip that are invisible to the naked eye. Logic gates, which work with binary data, include three basic operations AND, OR, and NOT. These operations can be combined to form additional operational combinations: NAND (NOT AND) and NOT (NOT OR). By combining these logic gates, an electrical engineer can design a series of logic gates to create a complex integrated circuit for many applications.

The world of digital circuits has a distinct language; terms like binary and Boolean are just the beginning. Another critical term is VHDL.

VHDL language is essential to the circuit design process, specifically for developing models.

Engineers who design circuits may work with large systems such as power grids, or at the small-scale individual transistor level. While a simple circuit design can be a one-person job, complex systems may require teams of electrical engineers. VHDL language enables electrical engineers to define the behavior of digital logic and develop high-level models for integrated circuits. It can also be used to design hardware and create test entities to verify that hardware’s behavior.

Circuit design involves the use of computer simulations to determine the most efficient process of transmitting data from one apparatus to another. VHDL language can be used to simulate and test the circuit functionality in achieving this goal. The simulations’ results, including outcomes from testing the design, inform electrical engineers on the physical constructs of an electronic circuit.

A synthesis tool runs the code to create and optimize a circuit design. Moving the circuit design process from conception to manufacturing requires developing blueprints that describe the size, shape, interconnections, and other information about the circuit.

A Look at VLSI Technology

The development of complex semiconductor and communication technologies in the 1970s led to Very Large Scale Integration (VLSI) technology. VLSI describes the process of using thousands of different transistors to build an integrated circuit, such as a microchip.

Before VLSIs, integrated circuits were limited in their functionality. Components such as the CPU, ROM, RAM, and other computer peripherals took up a lot of space, limiting the ability to scale up functionality. VLSI is a process that enables integrated digital circuit designers to include critical components on a single chip.

VLSI technology makes it possible for designers to increase the functional density of digital circuits. This makes it easier to develop robust applications that occupy a much smaller area. Industries such as the electronics, automotive, and medical fields take advantage of VLSI to create advanced technological innovations.

For example, electrical engineers can design integrated digital circuits that make handling life-saving medical devices more manageable and less awkward to use. In addition to implantable devices, digital circuits have made it possible to miniaturize imaging and surgical instruments, such as handheld and mobile imaging systems and surgical robotics. Consider micro-scale cameras that can be swallowed by patients, which can take images of the gastrointestinal tract in a less invasive way than traditional endoscopes.

Additional efficiency-related benefits of VLSI technology include the following.

While the world undergoes a digital transformation, one thing will remain constant: humans continue to perceive the world in analog. We understand analog signals, which can come in the form of the sounds we hear and the images we see. On the other hand, computers are digital. Information understood by computers comes in the form of digital bits. This form of signal enables computers to process and store data more efficiently than ever thought possible.

We increasingly rely on computers to access the data that powers and improves our modern lives. Still, humans need the information to be presented in analog to understand it. Digital circuits move data from the analog world to the digital world and back — enabling humans to perceive, enjoy, learn, and understand the information.

Electrical engineers develop the circuits that make this remarkable communication between humans and computers possible.

From radios and mobile phones to autonomous unmanned vehicles…from electronic navigation systems to micro-nano devices and far beyond — electrical engineers play a pivotal role in developing innovative technologies that move the world forward.

Students who want to understand engineering systems at an advanced level, and who wish to engineer a better future with responsible and sustainable design, should learn more about Ohio University’s online Master of Science in Electronic Engineering. The program offers the knowledge and skill to research, design, develop, and test new technologies and industry applications that can help make an impact on the world around us.

Embark on a new career at the forefront of technology with Ohio University.

Embedded Systems Engineer: Job Outlook & Salary Information
Electrical Engineering vs. Computer Science: Which Career Is Best for You?
How a Master’s Degree Can Boost Your Engineering Career

Britannica, Binary Number System
Britannica, Integrated Circuit
Electronics For You, VLSI: Development and Basic Principles of IC Fabrication
Elprocus, “Difference Between Analog Circuit and Digital Circuit”
Elprocus, “What is Digital Circuit: Design and Its Applications”
Fandom, “Digital Circuit”
Investopedia, Integrated Circuit Card
PC Mag, VHDL
Semiconductor Engineering, “Analog Circuits”
Science Daily, Circuit Design
Sparkfun, “Analog vs. Digital” Technique Today, Complete Overview of Digital Electronics
TurboFuture, “Why Is Binary Used in Electronics and Computers?”
Utmel Electronic, “What Is a Digital Integrated Circuit and How Do We Use It?”
WatElectronics.com, “What Is a Digital Circuit: Design, Types & Its Applications”
WhoIsHostingThis.com, “Get Started with VHDL Programming: Design Your Own Hardware”