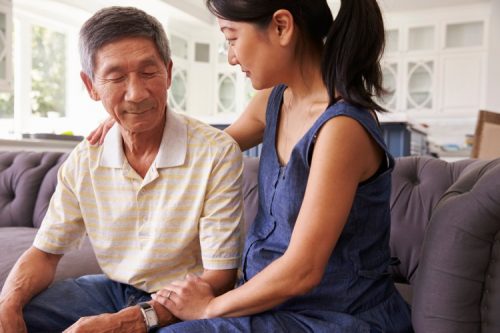 Symptoms such as memory loss, confusion, and mood swings, all of which are commonly associated with dementia and Alzheimer’s disease, are concerning, especially in a family member.

Family members who witness troubling symptoms will want to seek prompt medical intervention on their loved one’s behalf, as these are serious conditions that demand proper treatment. It’s worth noting that key distinctions exist between Alzheimer’s and other forms of dementia. Knowing the difference can be helpful to family members transitioning into caregiver roles.

Dementia is not a disease in itself. It’s a syndrome or a group of symptoms that occur together. Dementia may be caused by a number of different diseases, Alzheimer’s being the most common. An individual may also have mixed dementia, which describes dementia that’s caused by two or more different diseases that are present at the same time. While dementia describes a cluster of symptoms, Alzheimer’s describes an underlying cause.

Some symptoms typically associated with dementia include:

Individuals with Alzheimer’s experience many of these symptoms. For example, a common early indicator of Alzheimer’s is memory loss. People with Alzheimer’s may also experience confusion and disorientation, behavioral changes, and an impaired ability to speak, symptoms that all fall under the umbrella of dementia.

Alzheimer’s and the Brain

Alzheimer’s is a neurological disease that typically begins to damage the brain several years before symptoms become evident. While Alzheimer’s has no known cause or cure, researchers confirm the disease forms abnormal protein deposits in the brain, which then cause brain cells to lose their connections. Ultimately these cells die, and in advanced cases of Alzheimer’s, the brain shrinks.

In addition to Alzheimer’s, degenerative diseases such as Huntington’s and Parkinson’s as well as vascular disease, stroke, and HIV can also contribute to dementia.

Find Out More About Dementia vs. Alzheimer’s

For additional information on dementia vs. Alzheimer’s, consider these resources:

Dementia and Alzheimer’s: Facts and Statistics

Clinical data offers a helpful way of understanding who is at risk for dementia and Alzheimer’s, as well as potential treatments and their costs.

Prevalence and Demographics of Dementia

The World Health Organization provides context for the prevalence of dementia:

Populations at Risk for Alzheimer’s

Scientists say Alzheimer’s has no single cause. Rather, multiple factors likely make an individual at risk for the disease, including genetics, lifestyle, and environmental factors.

Medicare and Medicare Advantage typically won’t pay for room and board in memory care facilities, but they often will cover the cost of medical treatments and nursing care.

Mental and Physical Progression of Alzheimer’s

Alzheimer’s is a degenerative disease, which means its effects worsen over time. Experts say that the progression of Alzheimer’s typically involves three stages: early, middle, and late.

People in the early stage of Alzheimer’s may still live independently and function fairly “normally,” though they may be frustrated by memory lapses. Symptoms are usually mild, and may include:

Those in the middle stages of the disease usually require additional levels of care. Their symptoms are moderate, and may encompass:

Those with late-stage Alzheimer’s experience the most severe symptoms, and typically need extensive care. Symptoms can include:

On average, a person with this disease will live four to eight years past their diagnosis, though in some cases they may live as long as 20 years. The middle stage of Alzheimer’s usually lasts the longest.

Memory care facilities provide extended assistance for those with Alzheimer’s, and they’re designed in a way that minimizes patient confusion. These facilities are also structured to ensure patient safety, meaning there is little risk of patients wandering off and becoming lost or hurt.

While this disease has no cure, medications are available that can minimize memory loss and mediate other behavioral issues, such as changes in sleep patterns.

Resources for Addressing and Treating Dementia and Alzheimer’s

Dementia and Alzheimer’s patients, as well as their family members and caregivers, can find it helpful to learn about the interventions currently available, as well as some general strategies for living a rewarding life even with this difficult diagnosis.

A healthy lifestyle can minimize the risk factors associated with dementia and Alzheimer’s. Some basic practices include:

Handling an Alzheimer’s or Dementia Diagnosis

Getting an Alzheimer’s or dementia diagnosis is never easy, but some basic practices can help you cope.

At every step, maintain open communication with your doctor. Consider this resource:

Ultimately, people with Alzheimer’s often require full-time care in an assisted living facility. Choosing the right facility is important, as it encompasses both financial and quality-of-life factors. Take a look at these resources as you weigh this important decision:

Living a Full Life with Alzheimer’s and Dementia

Even with a diagnosis of Alzheimer’s or some other form of dementia, patients and their families can enjoy a rewarding life together. These resources can help:

Keep Current on Alzheimer’s and Dementia

A diagnosis of dementia, either caused by Alzheimer’s or something else, can be hard to deal with. Make sure you and your loved ones are armed with the right information about the disease’s progression as well as potential treatments.