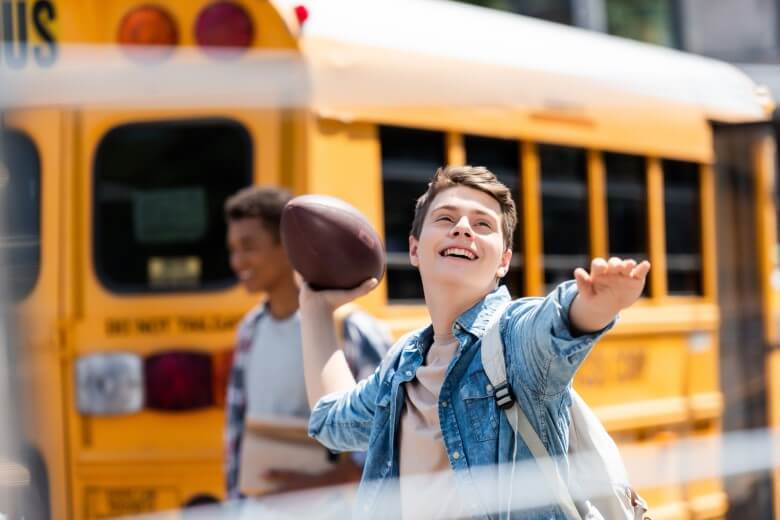 In high school, some players are athlete-students, and others are student-athletes. The difference often lies in motivation and priorities. What comes first in students’ lives may determine whether they go on to attend and graduate from college or enter adulthood without a career.

A recent change in eligibility standards for college-bound athletes elevates the importance of academic achievement for participation. High school sports managers’ duties include ensuring that athletes are on track for graduation. For NCAA eligibility, athletes need a GPA of 2.2. They must also have corresponding levels on the SAT or ACT. These requirements have led some athletic directors to enforce stiffer academic standards on high school athletes.

A Master of Athletic Administration online through Ohio University can offer professionals interested in becoming interscholastic athletic directors the skills and knowledge they will need to help young athletes balance athletics and academics.

Increased emphasis on academic achievement begins in high school and continues in college sports. In response to a series of college scandals in the early 1980s in which athletes were offered or received illicit payments, the Knight Commission was founded in 1989 by the Rev. Theodore M. Hesburgh, president of the University of Notre Dame, and William C. Friday, the former president of the University of North Carolina.

The commission aimed to reduce the emphasis on winning and moneymaking and increase the focus on education for all college athletes. Student-athletes and academics should be a natural combination, the commission concluded.

In 2001, when the commission reconvened, it didn’t find much progress in athletes’ academic performance. Its updated report found that:

“Athletes are often admitted to institutions where they do not have a reasonable chance to graduate. They are athlete-students, brought into the collegiate mix more as performers than aspiring undergraduates. Their ambiguous academic credentials lead to chronic classroom failures and chronic cover-ups of their academic deficiencies. As soon as they arrive on campus, they are immersed in the demands of their sports. In light of these circumstances, academic failure, far from being a surprise, is almost inevitable.”

This emphasis on athletic abilities over academics begins in high school or before. Many athlete-students see winning big in college sports as their best chance for success.

2018 NCAA Eligibility Standards Ask Athletes to Up Their Academic Game

The revised eligibility standards of 2018 ask students and their high schools to up their game in the classroom. For Division I NCAA sports, a 2.3 GPA in set courses is required with at least a 620 SAT or combined ACT of 47. The NCAA eligibility page shows combinations of GPAs and SAT or ACT scores that add up to eligibility.

According to the NCAA, a student-athlete who is a full qualifier has:

What Can the High School Athletic Administrator Do?

Given the increased emphasis on academic standards for students who aspire to be college athletes, what is the role of the high school athletic administrator?

Dr. David Hochs, in an essay for the National Federation of State High School Associations (NFHS), said overhauling facilities is not the best way for athletic directors to build a legacy. Instead, the focus should be on creating education-based athletics through discussions with the principal and superintendent. Further, parents also need to understand the need for academic success.

Hochs suggested hiring coaches who put education first and encourage student-athletes to do the same. This sort of policy can establish clear objectives and high standards for coaches and provide ongoing development.

Athletic directors can take a number of other steps as well, Hochs wrote, including expanding opportunities for students to participate in sports and offering new sports teams. They can also help student-athletes develop leadership concepts and skills.

“If athletic directors work to benefit their student-athletes and coaches, run their programs with the highest degree of integrity and ethics, they have done their part,” he wrote.

The 2018 NCAA eligibility standards elevated the goals for many athletic programs. Other schools were inspired to increase their benchmarks as well — though they had to be sensitive to their particular situations.

In Baltimore, for instance, many high schools struggled to keep students at a sufficient academic level to play team sports. New requirements included a grade-point average of at least 2.0 and no more than one failing grade. Several schools would not have been able to field teams under those rules, according to an article in the Baltimore Sun. As a result, they delayed implementation for a quarter to give students a chance to meet expectations.

“Holding our students to the highest academic standard is the utmost priority here for us at city schools,” Sean Conley, the school system’s chief academic officer, told the Sun. “We’re creating a high standard for our athletes, and that’s positive, that’s good.”

Ohio University’s Online MAA program is designed to teach professionals how to manage the intricacies of interscholastic sports. The university launched the nation’s first academic program in sports administration in 1966 and continues to be a leader in sports business education.

Student-Athletes vs. Athlete-Students: The academic success, campus involvement, and future goals of Division I student athletes who were university bound compared to those who would not have attended a university had they not been an athlete: The Sport Journal