Fresh off a survey that showed high school sports participation increased for the 29th consecutive year, interscholastic athletics experts see promise in 2019. An increase in female representation in team sports and improved efforts to reduce injuries are among the many trends that bode well for high school athletics in the coming year.

High school athletic administrators and athletic directors also say 2019 budget increases have been important for the growth of interscholastic athletics programs. For the third consecutive year, a growing number of schools reported an increase in athletics budgets, Coach & Athletic Director found through its 2019 State of the Industry survey.

“It’s a promising sign that athletic administrators have moved past the worst of their funding woes,” the periodical found in its eighth annual survey. “During the 2018-19 school year, one in four athletic directors said they were given a budget increase of at least 2 percent. Two years ago, that number was just 13.2 percent, indicating that a growing number of school districts are investing more in interscholastic athletics.”

With the greater investments in interscholastic sports, athletic directors will be seeking ways to utilize high school athletic administration strategies in daily operations. Learning these strategies through advanced education, including through Master of Athletic Administration online degree programs, can provide the needed competencies for success. 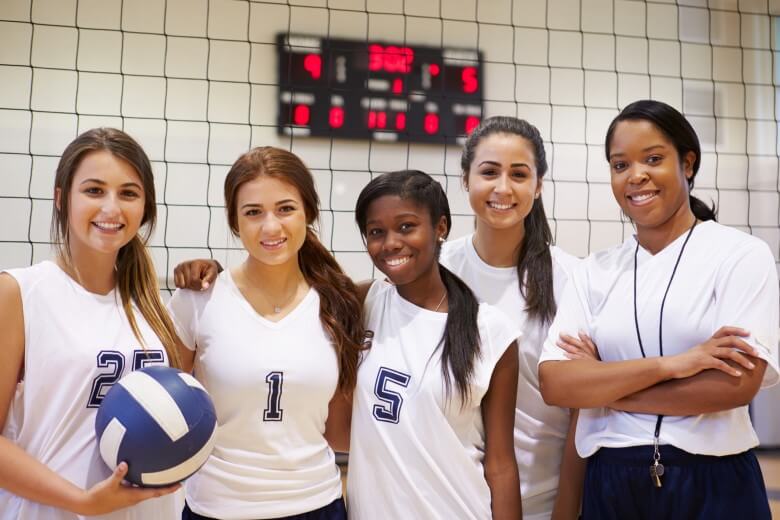 Changes and Improvements in Interscholastic Athletics

The survey of 51 NFHS member state high school associations found that 11-person football remains the top participatory sport for boys, even though participation dropped for the second consecutive year. The decline, however, was only 2 percent in the 2017-2018 school year, compared to a 2.5 percent decline in the 2015-2016 school year.

Karissa Niehoff, NFHS executive director, said the efforts to reduce concussion risks for high school students has been paying off. Students are coming back to the sport.

“While there may be other reasons that students elect not to play football, we have attempted to assure student-athletes and their parents that thanks to the concussion protocols and rules in place in every state in the country, the sport of football is as safe as it ever has been,” she said.

Among boys sports, the most gains in participation were seen in:

Among girls sports, the most gains in participation were seen in:

Overall, high school athletes across the country participate in 65 different sports, including 13 adaptive sports for students with disabilities. Among the up-and-coming, non-traditional sports are badminton (17,898 students involved), archery (10,460 students), and fencing (4,513 students). There are also two other newcomers — bass fishing and ultimate Frisbee.

In the survey, athletic directors indicated 5 top areas of interest for 2019:

For the past five years, finding qualified coaches has remained at the top of the list for athletic directors. In the past, teachers took roles as coaches in interscholastic athletics. But with an increase in classroom responsibilities and smaller coaching stipends, teachers are no longer serving in coaching roles. The shift leaves athletic directors searching outside schools to find candidates, many of whom might not be familiar with education-based activity programs.

Parent-coach conflicts have been increasing, the survey found. In fact, problems with parents have never ranked higher than number three on the annual survey until this year. While there are several theories about why it is happening, athletic directors are also finding some solutions.

Some athletic directors have found that mandatory preseason meetings have opened parent-coach communications and set clear rules about acceptable and unacceptable behaviors. Others have found that having parents take online workshops can help them understand the mission of education-based athletics.

“Most agree that there must be established consequences for unruly behavior, and they should be enforced without exception,” the survey said. “That could mean removing parents from games or banning them from athletics facilities altogether.”

3. Bouncing back after the economic downturn

Many athletic directors have turned to fundraising campaigns to pay for minor improvements to their facilities and new team uniforms.

Volunteerism across the United States is at its lowest point in 20 years, so it stands to reason that there is a growing need for volunteers in interscholastic sports. The lack of volunteers leaves gaps in booster clubs and concessions stands, which are important revenue generators for sports teams.

Some schools are offering small stipends or free team gear as incentives to parents and teachers for participation to combat the shortfall.

As a result of budget shortfalls and a lack of volunteers, athletic directors have been taking on more responsibilities both in sports and education.

To address the topic, athletic directors have been opening lines of communication with their supervisors with ideas about getting assistance.

In addition, the survey highlighted several other areas where athletic directors see changes in the coming year.

The survey also highlighted additional important areas to monitor, such as human resources management issues, keeping up with technology and athlete eligibility.  In a late 2018 interview with the NFHS, Executive Director Niehoff also said mental health education, pressures on students to specialize in a single sport, and the rise of non-education (club) sporting programs are trending areas of interest in interscholastic athletics. Niehoff stressed the importance of keeping high school sports intact so all students can benefit.

For athletic directors, understanding the trends and outlook for the future is essential to the position. When asking, “What does a high school athletic administrator do?” aspiring athletic directors should understand the intricacies of the job. A vital part of working in interscholastic sports is earning an education that can support the profession’s many challenges.

The program works in collaboration with the National Intercollegiate Athletic Administrators Association (NIAAA) to prepare graduates for certification and is accredited by the Commission on Sport Management Accreditation (COSMA).